Earlier this week, I had a follow-up appointment at my physician’s office.  There were several individuals waiting to be seen.  I glanced around the room after checking in at the front desk, noticing that everyone seemed in his/her own little world.  One woman was watching the television, glancing at her watch every now and again.  Two were leafing through magazines.  Another person brought a book and was reading.  The woman sitting next to me seemed agitated as she fanned herself with her hand.  There was no conversation.  No eye contact.  No smiles of acknowledgement.  After all, we didn’t know one another and were obviously much too busy, uninterested, and/or sick to bother with strangers.

All of that changed, however, when a woman named Allison entered the room.  While I never learned her age, Allison appeared to be in her 40’s and was wheeled into the waiting room by her elderly father.  As she entered the room, she looked around, waved and belted out a huge hello to everyone.   While her father checked in with the front desk staff, Allison faced the waiting room chairs and cheerily said hello again.  Innocently, she asked each of us our name, questioned our age, and told us (individually) how “gorgeous” or “pretty” we were.  She commented on our clothing, asked about our children and, in one case, grandchildren.  She wanted to know what we did and if we liked it.  She proceeded to share funny stories about her birthday celebration in Las Vegas….which, as Allison’s father corrected her with a smile, turned out to be a day at a local casino instead.  Allison herself flipped through the pages of a magazine, laughed at the photos, and shared her thoughts as she turned the magazine around so we could see what she was referencing.  She thought the Geico cavemen were hilarious and decided she was going to marry one of the handsome models in a clothing advertisements.  As patients came and went, Allison proceeded to connect with each…saying hello or goodbye and acknowledging something special.  The women in the room laughed hardily as Allison told a young man, likely in his late teens/early 20s, that he was hot.

Allison’s comments were beautifully simplistic, positive, filled with curiosity and wonder, and fueled by a seemingly genuine interest to connect.  As I was called back for my turn to see the doctor, I couldn’t help but reflect on the shift in the room because of Allison’s presence.  People were smiling, sharing stories with one another, and agreeing with Allison about things in life that were funny and beautiful.  It struck me that Allison had not only a sincere desire to connect with people but, despite any limitations she may have possessed, a strong intuitive ability to touch them at their core.  She reminded people what it meant to be human, to have challenges and, in spite of them, see life’s beauty.

Hours after my doctor’s appointment I found myself still smiling and, at times, chuckling out loud.  What if we, like Allison, opened our minds and hearts to what’s positive, beautiful, and funny in life?  What if we took the time to make eye contact with strangers and smile?  What if we were genuinely and innocently curious and caring?  What if we looked beyond what’s wrong in life and, instead, focused more on what’s right?

While I’m not certain, I think Allison knows that the answers to these questions have the power to influence not only our individual worlds but the worlds of those around us.

When my daughter was about seven years old, she asked me one day what I did at work. I told her I worked at the college – that my job was to teach people how to draw. She stared at me, incredulous, and said, “You mean they forget?” 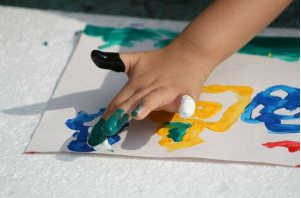