I recently had the honor of presenting at Converge 17 — this year’s Global International Coach Federation (ICF) Conference. Here is the ICF-Maryland Chapter story of how we’re using coaching to influence social change. What’s your story?

In my city, there have been over 225 homicides this year, making its homicide rate one of the highest in the country:  the oldest victim 97; the youngest, just 1.

In 2015, this city made world-wide news with an eruption of civil unrest after the death of Freddie Gray while in police custody.

There have been countless articles and alarming reports of the surge of opioid-related deaths.   Deaths due to heroin, prescription opioids, and non-pharmaceutical fentanyl.

According to a recent report, 22.9% of the population lives below the poverty line – 7.4% higher than the national average.

I speak about Baltimore City – the heart of the ICF-Maryland Chapter.

The question then arises – what can we do?   How can we respond as coaches?

Although I’ve served the Maryland Chapter both as Board and Committee member since its inception in 2010, today I’m speaking to you as the Chair of Maryland’s first Outreach Committee.

It was in this environment in 2016 that ICF-MD knew it was time to do more.   About this time last year, we broadened our Chapter’s influence to include formal Outreach efforts.

With the goal of starting small but with a passionate commitment to impact our community in an immediate and big way, we spent months researching opportunities where coaching could influence positive social change at a grassroots level.

I’m pleased to share with you a video that captures the amazing work we’re doing in support of our partner organization called Turnaround Tuesday: 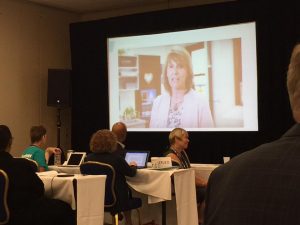 In many ways, the video speaks for itself.  I’d like to share just a few key points that, I believe, make this work special.

1)   Turnaround Tuesday was established by its sponsor organization – BUILD (Baltimoreans United in Leadership Development) as a result of the increasing need for social change.

When identifying how to make the city a better place to live, BUILD leaders took to the streets – literally talking to people on street corners and knocking on doors – asking citizens within the communities what THEY believed was needed to reduce crime & drug use as well as to increase their ability to not just survive but thrive.

As you can imagine, the #1 answer they received was jobs.  People needed living-wage jobs and the means to get to them.  Without jobs, people expressed despair and hopelessness.  Without jobs — drug use, drug sales, crime, and unrest would inevitably persist.

2)  BUILD leaders also asked people what THEY were willing to contribute to create change. Individuals were rallied to support constructive change efforts, including approaching the area’s largest employers to help put Baltimore’s citizens to work.

Both BUILD and our partner organization, Turnaround Tuesday, which was born as a result of the “on-the-street” conversations, are dedicated to making Baltimore a better place for its citizens.

I believe the secret to their success lies in their commitment to identify and develop leaders in every neighborhood.  They meet people where they are and seek change – not FOR people – but WITH people.  They build power by building community.

Of course, WE recognize these approaches to change are rooted in coaching:  meeting people face-to-face, where they are, without judgment, to build relationships first.

Our work with TAT has evolved over the year.  Our amazing team of volunteer coaches and incredibly supportive Board, several of whom are here today, have allowed us to:

As I reflect on our accomplishments, I think our biggest success can be found in a recent conversation I had the opportunity to witness earlier this month.

The Director shared that, when ICF-MD first approached TAT last year, someone on their staff asked, “What would it look like to have a bunch of (mostly) white women come to provide coaching to (mostly) African American participants?”

He responded, “We won’t have to worry about it – they won’t be here next month.”  He then looked up from his notes and said, “I was wrong.”   “They returned, and returned, and returned, and returned.”   “I know these individuals now and can tell you they are here for the right reasons.  It’s not about the white people coming to save the blacks.  ICF-MD is woven into the fabric of our organization.  We could not do what we do without their support.”

We also believe that, with time, when watching the nightly news, the stories of Baltimore will change.  They will include not only the richness the community has to offer – including Fort McHenry, the birthplace of the Star Spangled Banner, the beautiful Inner Harbor, our beloved sports teams, the tapestry of our diversity, but most of all – you’ll hear stories of positive social transformation through community & humanity.